As Term 4 gets underway, ACC activities kick off with a busy few weeks ahead. Year 9 & 10 cricket, tennis and volleyball commence tomorrow, with Year 7 & 8 sport also starting on Thursday. The Junior & Intermediate Chess competitions are scheduled for Wednesday at Parade College, with the Sports Leadership Workshop taking place next Wednesday. Plenty on the agenda and lots to look forward to.

A reminder for ACC sport – check the fixtures and results online via the ACC website. The most up to date details regarding venues and starting times is always available online. If there are any questions regarding these details, please contact the Director of Sport at your school.

Over the past few weeks we have witnessed some incredible sporting feats, many of which featured current and former students from ACC schools. The TAC Cup football final featured several current students from St Bede’s, with the Sandringham Dragons winning by 17 points over the Murray Bushrangers. Conor Larkin and Hayden McLean both performed well and were solid contributors to the premiership win.

One of the most memorable events of recent times was the Western Bulldogs winning their first AFL premiership since 1954. The grand final itself was an amazing game, but the historic victory has helped cement the players and coaches into footy folklore at the Club. One person largely credited with the success of the group is the Coach, Luke Beveridge. A former student of St Bede’s College, Luke has created history in only his second year at senior AFL level. No doubt there are plenty of wonderful times ahead for the Western Bulldogs under the coaching of Luke Beveridge! 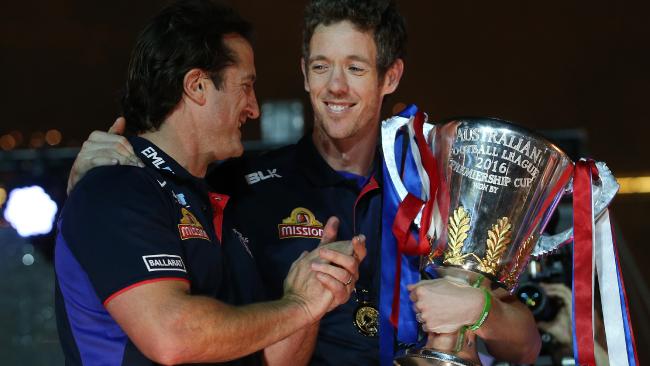 Also of interest was the involvement of former students in the premiership win, Matthew Boyd (Mazenod College) & Luke Dahlhaus (St Joseph’s College) – both of these players can add a premiership to their list of playing achievements!

If you know of any other recent achievements by current or former students from our member schools, please forward details to paddy@accmelb.com.au