Congratulations to all schools involved in the Term 1 senior grand finals yesterday. It was a wonderful day of ACC sport and a terrific way to finish off sport for first term.

The “Johnson Oval” at Mazenod College looked resplendent in the afternoon sunshine and proved to be a good hunting ground for the De La Salle team. They batted first and posted a respectable score of 8/134, utilising all 35 of their allocated overs. Michael Jakes top scored with 41, with Khy Horsnell (25) and Liam Manakis (20) also chipping in with good scores. St Joseph’s couldn’t find their rhythm early in their innings, struggling to build momentum and score important early runs. The loss of two wickets in the 8th over and another in the 10th left their premiership aspirations precariously balanced. Solid bowling and some outstanding fielding put the result beyond doubt, as De La continued to gain ascendancy as the match progressed. Final scores: De La Salle 8/134 def St Joseph’s 54. Congratulations to De La Salle, clinching their 2nd title in three years.

Reigning premiers, CBC St Kilda, faced St Bede’s Mentone in the Division 2 grand final at Whitefriars College in Donvale. St Bede’s batted first and despite the outstanding condition of the Whitefriars oval, could only manage to score 56 runs before losing all of their wickets. The domination of the CBC bowling attack put the St Bede’s team on the back foot early and they were never able to recover. When CBC came in to bat, they made quick work of the low target, passing the required runs and losing only two wickets in the process. Declan O’Brien was the top scorer for CBC with 31 n.o. Well done to all involved with the CBC team. Final scores: CBC 2/60 def St Bede’s 56.

After several years of finishing runner-up in senior grand finals, 2016 proved to be a much better result for the St Bernard’s tennis team, defeating Whitefriars in an entertaining match at Melbourne Park. The doubles results went the way of Whitefriars (3-1) and it seemed that another close finish might be on the cards. The quality and depth of the St Bernard’s outfit shone through in the singles, however, as they powered through to win 7 of those 8 sets to finally take the much sought after title. Congratulations to the St Bernard’s boys on a great result. Final scores: St Bernard’s 8/81 def Whitefriars 4/65. 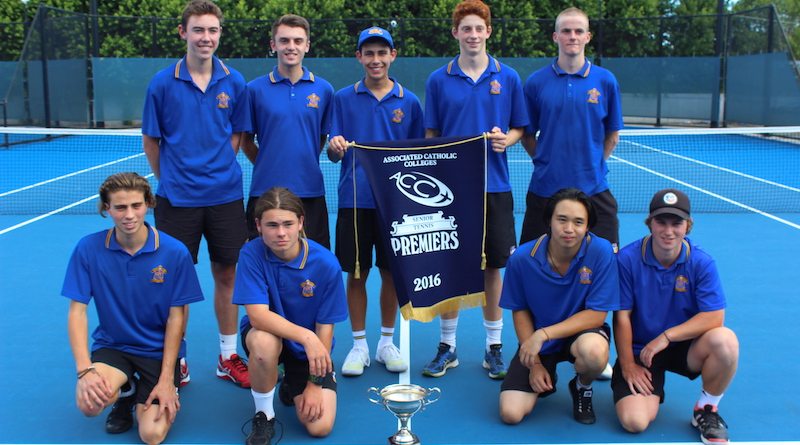 After an incredible win in the “B” semi final last week over Parade, Salesian College faced the talented Mazenod outfit in a “David v Goliath” contest at the State Volleyball Centre. The depth of talent proved too strong, as Mazenod powered through to a 3-0 victory maintaining their unbeaten record in senior B finals since they entered the ACC back in 1999.

The “A” final saw two old rivals come together in what promised to be another hard fought encounter. In four close sets, it was Mazenod that finally overcame a determined St Bernard’s outfit to record another volleyball premiership for their College. Well done to all participants on their great skill and excellent sportsmanship.