It has been a massive few months of soccer for Mazenod College!!!! After winning the ACC Senior Soccer Title, Mazenod qualified for the 2019 Melbourne City FC Premier Schools Tournament.

The format changed from last year with the top two sides from each group meeting in the semi final, which was then to determine who would meet each other yesterday at Melbourne City’s training facilities at Latrobe University in Bundoora.

The group stages began last week at Kingston Heath Soccer Complex. Mazenod started their campaign against St Francis Xavier College pumped up!! Their strong performance saw them win 3-0, securing a strong start to the tournament. The second game was a match up against Emmaus College from the EISM. A slow start from Mazenod saw them drop to a 1-0 deficit at halftime. After a halftime chat with their coach, Mazenod appeared determined to secure their spot in the semi final. An early score put the juggernaut into another gear helping them finish their comeback at the full time whistle, winning 2-1.

The semi final was very wet, with the rain pelting down throughout the game. Mazenod were to face Camberwell Grammar, with the winner advancing to the grand final. Even though the conditions were wet, Mazenod went to another gear. The team got stuck in from the beginning playing, hard and fair but also making certain to win the 50/50 battles. The boys secured a 2-0 victory in a game where the result could’ve gone either way.

This brings us to the 12th September, 2019 at Melbourne City’s training ground at Latrobe University, Bundoora. Mazenod V Overnewton was the match up. Mazenod were searching to make history, by winning their first ever Premiers Cup. In a game that had absolutely everything, Mazenod went down 0-1 early and it stayed that way at halftime. A chat by Head Coach Emilio Montoya & Assistant Navan Villupillay at the half fired up the boys. Mazenod equalised with a free kick by ACC Team Of The Year, midfielder, Nishan Villupillay to make it 1-1. This is all both sides had at the end of regulation as they headed into penalties to decide the 2019 Champion.

In what was nervous moments for the players as they stepped up to score their penalty, Mazenod/ACC Team Of The Year Goalkeeper Thomas Haddad kept his cool and pulled off two fantastic saves to help Mazenod win the cup 4-3 in the penalty shootout.

On behalf of the ACC we would like to congratulate Mazenod College and the staff involved for this fantastic achievement! You have not only been a credit to the sport of soccer this year but also the Association and most of all your school.

We wish you all the very best for next season and also like to say thank you to all the Year 12 boys in the team for their service to the ACC and Mazenod for the last six years. 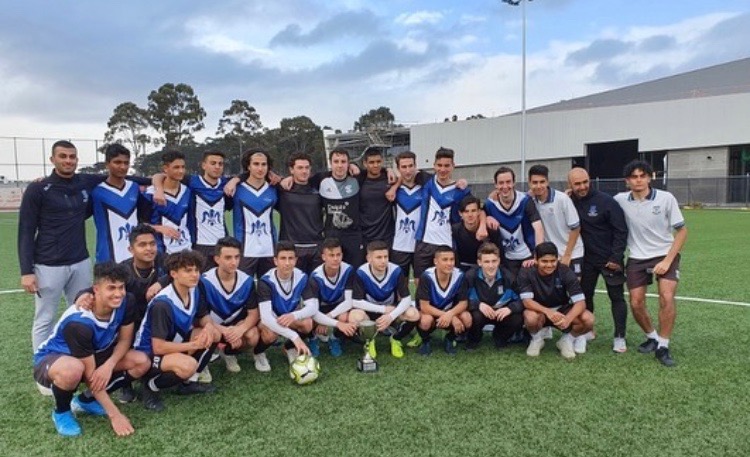