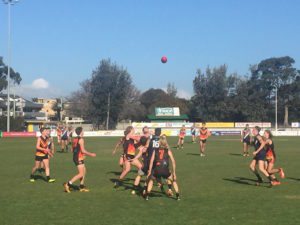 Semi final 1 (ACC v SSV) was a low scoring affair in the first half, as both teams heaped pressure on their opponents resulting in turnovers and missed opportunities up forward. St Joseph’s held a 6 point lead at quarter time and were able to extend it slightly to 9 points at the main break. As the second half unfolded, it looked like Geelong by how far, as their midfield started to assert some dominance and their forwards responded with some telling early goals. Not to be outdone, EKC lifted their workrate and finished the quarter strongly, reducing what could have been a game winning margin back to 3 straight goals. EKC kept that momentum going into the fourth, keeping St Joseph’s goalless for much of the quarter and banging through three excellent goals to be within a single kick. A positive forward entry and strong mark 35 metres out from the EKC goals with only a minute remaining had the numerous Geelong supporters chewing their fingernails. As the footy drifted across the face of goals to register a point, a collective sigh could be heard around the ground as Geelong held onto a narrow one point advantage. With only seconds remaining, St Joseph’s moved the ball from one end to the other in quick time and kicked a major as the siren sounded to record a 7 point victory. Both teams should be congratulated on the excellent standard of football and the great sportsmanship shown throughout the match. 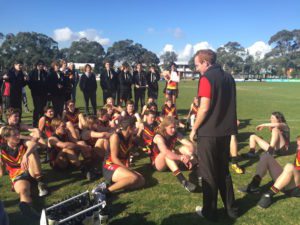 This fantastic win sees St Joseph’s progress through to the grand final at the home of footy – The MCG. The match will be played against St Pat’s Ballarat, who won their semi final in a canter against their SACCSS opponent, Mackillop College. Match details will be confirmed in the coming days, but it will be held on Saturday July 30th as a curtain raiser to the Collingwood v West Coast AFL match. Start time will be around 1pm (to be confirmed by AFL Victoria).