The finale for Term 2 sport lived up to all expectations – close results, excellent contests and exceptional skill level for school sport. Fittingly, four schools shared the premiership titles up for grabs, evidence of the closeness of our competition and the even spread of talent across our member colleges.

The soccer teams travelled out to the Veneto Club in Bulleen, our regular grand final venue over many years. A brand new surface and the great venue set up helped to create a fantastic atmosphere for the senior double header. In the Division 2 match, a very even contest had a nil-all result at half time, with both Mazenod (2nds) and De La Salle both working hard to create chances up forward. It was De La Salle that finally broke the shackles in the second half, scoring an early goal and then opening the flood gates to bang through four more before the final whistle. Final scores: De La Salle 5 def Mazenod (2nds) 0. 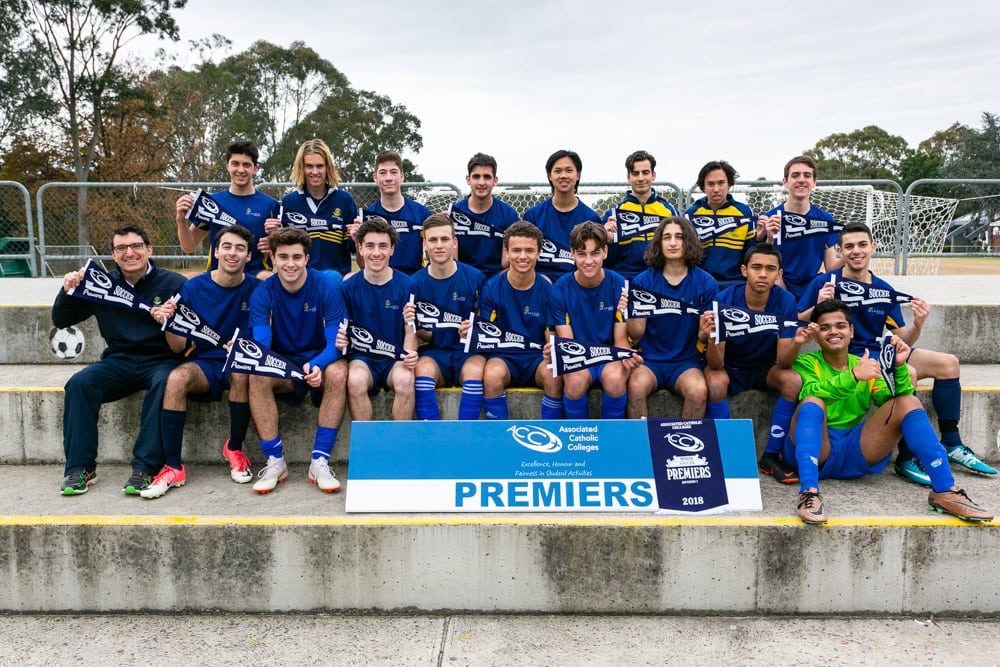 St Joseph’s Geelong were the form team coming into the Division 1 final, but their opponents knew a thing or two about winning ACC premierships, having taken out back to back titles in 2016 and 2017. The early action had both teams peppering the goals, with some disappointment on both sides as potential goals were disallowed for offside and penalty infringements. Despite that, excitement levels  built as Mazenod hit the back of the net from open play and St Joseph’s followed before the half to have the scores level at 1-1. The second half saw the action step up another notch, but St Joseph’s were unable to hold back the scoring power and teamwork of the reigning premiers and Mazenod scored twice to put the result beyond doubt. Final scores: Mazenod 3 def St Joseph’s Geelong 1. 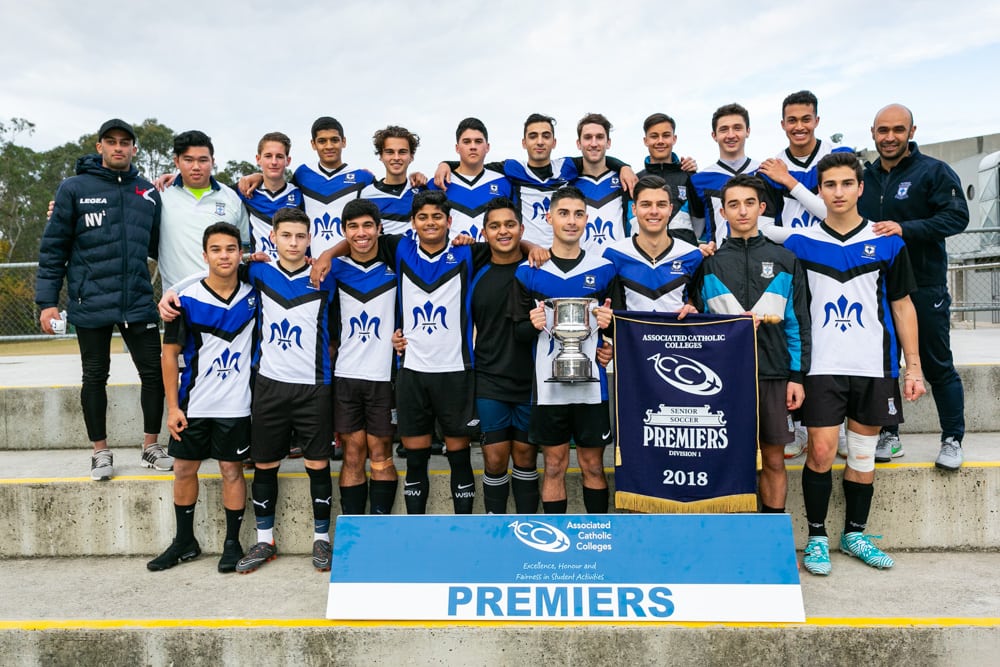 Our football finals moved to a new venue this year – Trevor Barker Oval in Sandringham. The ground was in superb condition and players and spectators alike enjoyed the atmosphere of a high quality VFL venue. The early game had St Bede’s 2nd 18 and Parade 2nd 18 meeting for the second time this season, with the Mentone boys looking to repeat their earlier victory, but this time on the big stage. They took the early ascendancy via straight kicking – 3 shots each, but three straight to St Bede’s compared to 1.2 to Parade, with more of the same in the second. The third quarter saw both teams kick three apiece and the stage was set for a terrific last term. Although St Bede’s had been steady across the whole match, Parade surged in the last and were able to narrow the margin with better team play. After a tight and entertaining final 20 minutes, St Bede’s were able to hang on and record a well-deserved victory. Final scores: St Bede’s 9.9.63 def Parade 8.7.55 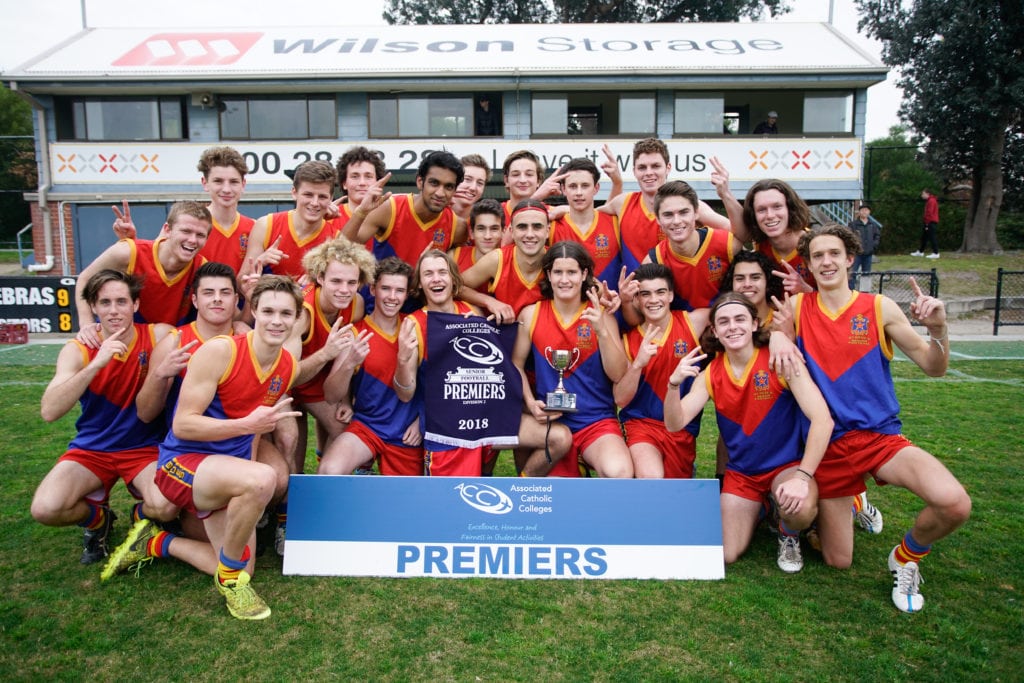 There was huge anticipation around the Division 1 final after one of the closest seasons on record for ACC senior sport. St Bernard’s and Whitefriars were the two premiership contenders following narrow wins in their respective semi finals last week. A low scoring, hotly contested first half resulted in numerous stoppages and intense pressure around the ball. Neither side was able to assert any dominance, but St Bernard’s were showing ominous signs with several shots on goal hitting the post. If not for inaccurate kicking, the game could have been all but over before the main break. 3.8 to 2.1 gave St Bernard’s a 13 point half time lead. The second half was one of the most outstanding 40 minutes of school football you could ever see – sublime skills, spectacular marks, incredible goals and two teams fully committed to give their all in the pursuit of the ultimate reward. The 3/4 time score had the lead still with St Bernard’s, but with the margin was less than a goal. Over the final 20 minutes of this fantastic contest the lead changed numerous times, as Whitefriars fought back every time their opponents scored a major. With only seconds left on the clock, a Whitefriars mark and goal narrowed the margin to a single point, and as the siren sounded, there was an equal mix of jubilation and exhaustion. A senior premiership by the smallest of margins makes for unforgettable memories – St Bernard’s held on and were able to claim their second title in as many years and progress through as the ACC representatives in the AFL Victoria Herald Sun Shield competition. Final scores: St Bernard’s 8.11.59 def Whitefriars 9.4.58 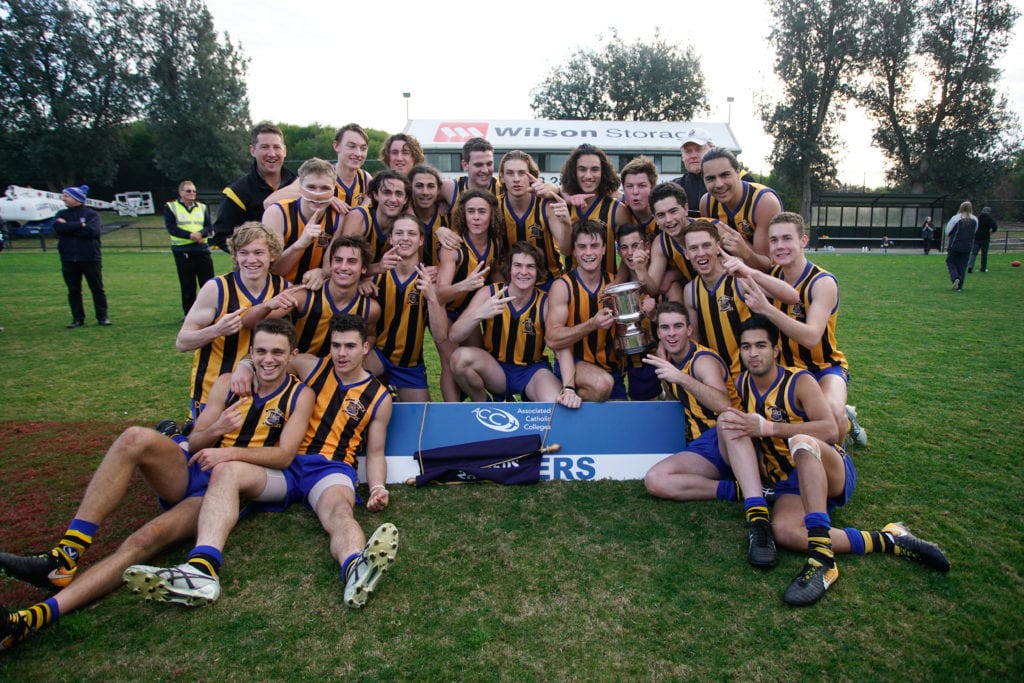