The 2016 Cricket Victoria “Premier Schools Shield” has been held this week, with eight different school sport associations represented in the competition. As the reigning ACC premiers, De La Salle won the right to take part in the tournament and continued on with their outstanding form from earlier this year.

The ladders at the conclusion of the preliminary rounds is below: 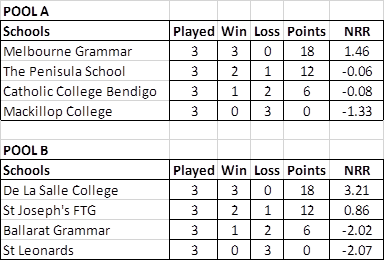 The grand final will be held on Monday December 12th, 11am at Harry Trott Oval.
Venue: https://goo.gl/maps/tdkwD86W6sy

In an interesting twist, De La Salle’s grand final opponent will be our newest member school, St Joseph’s, Ferntree Gully. This will be the final match that St Joseph’s will be involved in for EISM before they move across to join our Association in 2017. It promises to a fantastic match, so come along and support both teams on Monday.