What a day of ACC Athletics! With some hot action on track and some sensational field event performances at Lakeside Stadium for the 2019 Athletics Championships. On a surprisingly warm day, the stage was set for an amazing day of competition with athletes looking resplendent in their school colours. There was a grand total of 617 athletes all performing to the best of their ability, with two of those attaining new ACC records. Congratulations to: 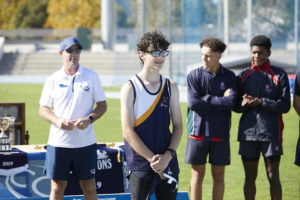 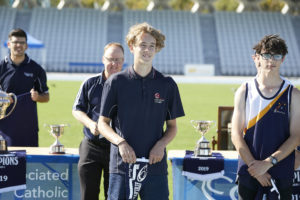 Another year and another fantastic performance from Parade College, as they claimed their third Athletics Championship in a row! This is the third year that the historic and much coveted “Old Collegians Shield” will find its home in Bundoora. Parades final score of 335 saw them place 43 points ahead of Whitefriars College (292), whilst St Joseph’s Geelong finished in third place with 288 points. St Bernard’s finished in fourth (271), with St Bede’s (222.5) and De La Salle (219.5) very close finishing fifth and sixth. With De La Salle finishing in 6th they will move into Division 2 for 2020.

Salesian College burst out from the blocks from the beginning of the day and did not let up! Salesians performance won them the Division 2 Cup, scoring 373 points, ahead of St Joseph’s Ferntree Gully (320) and Mazenod (269). Emmanuel held onto fourth place again this year , just missing out on third by a point (268). CBC (253) and Simonds (113) finished off the placings.

To view the full results package, click on the link below.

This is the largest annual event that the ACC conducts and it requires a significant number of helpers to ensure that it runs efficiently. The ACC would like to acknowledge the many volunteers and officials that contributed so well to the success of the day – a great team effort all round!