The ACC Open Badminton Competition was held at MSAC yesterday, in what was one of the best competitions that has been held since it first began in 2013.

It was the first time all 12 ACC schools competed against one another for the chance to win the coveted Open Badminton championship.

Two pools were played out the first five rounds of competition before a crossover occurred in the semi final round. the winner of the top two semi finals, qualified for the grand final.

In what has become a massive rivalry in ACC badminton history, Salesian College and Mazenod College played off in the grand final to try secure the title of which only these two schools have ever won.

Mazenod was looking for back-to-back titles, while Salesian was looking to get their name back on the trophy, that Mazenod won from them to stop the three peat the year before.

Salesian started strongly winning 4 of the 6 singles games to lead into the doubles 4-2. Mazenod had no choice but to try and win all the doubles to take the title. winning 2 out 3 Mazenod fell short due to a momentous victory by Salesian in one of the match ups.

Congratulations to Salesian College on winning the Open Badminton Championship. Also a big thank you to all the schools that were involved and the coaches that helped out throughout the day. 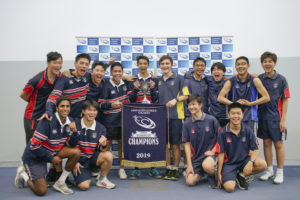